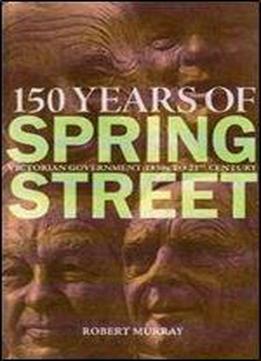 The transfer of representative government to the Australian colonies and the flourishing of robust democracies over 150 years have been among our greatest success stories, perhaps, given their fundamental importance, even our greatest. It is strange, then, that the politics of Victoria has attracted so few writers of general history. There have been recent studies of the Victorian Parliament, and biographies of the Premiers, but few histories of Victorian politics in the broad sense, other than conservative H.G. Turners two-volumes (1905) and a centenary commemorative volume issued in 1958.The official Victorian sesquicentennial volumes published in 1984 simply left the politics out. Bob Murray has no axe to grind like Turner and he has no t in commemorative puffery. He digs beneath the surface to divine the springs of politics. A shrewd observer of Victorian politics for almost 50 years, and an experienced journalist-historian, he gives us in 15YearoSprinStreetan independent-minded, measured and thoroughly engaging overview of the political hurly-burly. He has something distinctive to say, and to my mind that something amounts to a provocative, even startling, re-reading of the course of Victorian politics and of the achievements of the Parliament. s