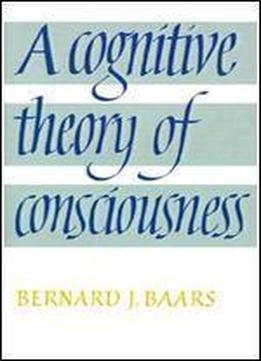 Conscious experience is one of the most difficult and thorny problems in psychological science. Its study has been neglected for many years, either because it was thought to be too difficult, or because the relevant evidence was thought to be poor. Bernard Baars suggests a way to specify empirical constraints on a theory of consciousness by contrasting well-established conscious phenomena - such as stimulus representations known to be attended, perceptual, and informative - with closely comparable unconscious ones - such as stimulus representations known to be preperceptual, unattended, or habituated. Adducing data to show that consciousness is associated with a kind of global workplace in the nervous system, and that several brain structures are known to behave in accordance with his theory, Baars helps to clarify many difficult problems.