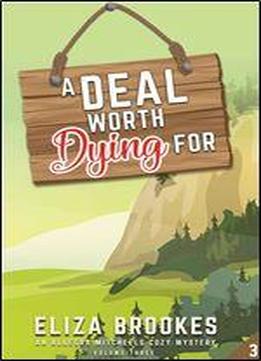 Allegra Mitchells is going on vacation! Well, almost. All she has to do is make it through one more week and she’ll be home free. One week of daydreaming about hiking the Andes and catching up with some old friends. Unfortunately, a wily murderer has other plans. Before she knows it, Allegra is caught up in another murder investigation and again it’s against her own will. The mayor wants to get to the bottom of this before investors pull out of a new deal that could benefit the town. With all eyes on her, her daydreaming has to be put on hold as she tries to catch a clever, organized killer in time to catch her flight. To make matters worse, an old friend makes an appearance and puts the rest of her team on edge. And as if she didn’t already have enough to focus on, everyone around her seems to have lost their mind. One week never seemed so long, but now it’s beginning to feel like an eternity with cat-fights, a murdered businessman and a corporate deal gone haywire.