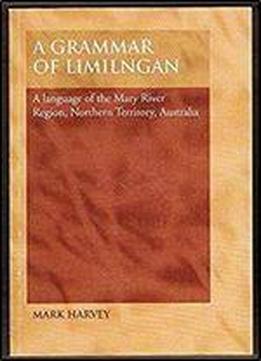 A Grammar Of Limilngan: A Language Of The Mary River Region, Northern Territory, Australia
by Mark Harvey / 2018 / English / PDF

This grammar provides a description of Limilngan, a previously undescribed and now extinct language of northern Australia. Australian languages generally show a high degree of structural similarity to one another. Limilngan shows some of the common Australian patterns, but in other areas it diverges significantly from them. It has a standard Australian phonological inventory, bit its phonotactic patterns are unusual. Some heterorganic clusters such as /kb/ are of markedly higher frequency than homorganic clusters such as /nd/. Like a number of Australian languages, Limilngan has many vowel-initial morphemes. However, historically these result from lenition and not from initial dropping as elsewhere in Australia. Like many northern languages, it has complex systems of both prefixation and suffixation to nominals and verbs. Prefixation provides information about nominal classification (four classes), mood, and pronominal cross-reference (subject and objects). Suffixation provides information about case, tense and aspect. Limilngan differs from most Australian languages in that a considerable amount of its morphology is unproductive, showing complex and irregular allomorphic variation. Limilngan is like most Australian languages in that it may be described as a free word order language. However, word order is not totally free and strictly ordered phrasal compounding structures are significant (e.g. in the formation of denominal verbs).