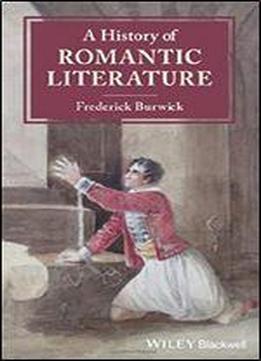 A History Of Romantic Literature
by Burwick / 2019 / English / PDF

Historical Narrative Offers Introduction to Romanticism by Placing Key Figures in Overall Social Context Going beyond the general literary survey, A History of Romantic Literature examines the literatures of sensibility and intensity as well as the aesthetic dimensions of horror and terror, sublimity and ecstasy, by providing a richly integrated account of shared themes, interests, innovations, rivalries and disputes among the writers of the late eighteenth and early nineteenth centuries. Drawing from the assemblage theory, Prof. Burwick maintains that the literature of the period is inseparable from prevailing economic conditions and ongoing political and religious turmoil, as well as developments in physics, astronomy, music and art. Thus, rather than deal with authors as if they worked in isolation from society, he identifies and describes their interactions with their communities and with one another, as well as their responses to current events. By connecting seemingly scattered and random events such as the bank crisis of 1825, he weaves the coincidental into a coherent narrative of the networking that informed the rise and progress of Romanticism. Notable features of the book include: A strong narrative structure divided into four major chronological periods: Revolution, 1789-1798 Napoleonic Wars, 1799-1815 Riots, 1815-1820 Reform, 1821-1832 Thorough coverage of major and minor figures and institutions of the Romantic movement (including Mary Wollstonecraft, Elizabeth Montague and the Bluestockings, Lord Byron, John Keats, Letitia Elizabeth Landon etc.) Emphasis on the influence of social networks among authors, such as informal dinners and teas, clubs, salons and more formal institutions With its extensive coverage and insightful analysis set within a lively historical narrative, History of Romantic Literature is highly recommended for courses on British Romanticism at both undergraduate and post-graduate levels. It will also prove a highly useful reference for advanced scholars pursuing their own research.