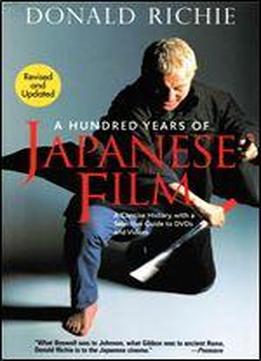 A Concise History, with a Selective Guide to DVDs and Videos. Revised and Updated. A Hundred Years of Japanese Film by Donald Richie, the foremost Western expert on Japanese film, gives us an incisive, detailed, and fully illustrated history of the country's cinema. Called "the dean of Japan's arts critics" by Time magazine, Richie takes us from the inception of Japanese cinema at the end of the nineteenth century, through the achievements of Kurosawa, Mizoguchi, and Ozu, then on to the notable works of contemporary filmmakers. This revised edition includes analyses of the latest trends in Japanese cinema, such as the revival of the horror genre, and introduces today's up-and-coming directors and their works. As Paul Schrader writes in his perceptive foreword, Richie's accounting of the Japanese film "retains his sensitivity to the actual circumstances of film production (something filmmakers know very well but historians often overlook) . . . and shows the interweave of filmmaking - the contributions of directors, writers, cinematographers, actors, musicians, art directors, as well as financiers."