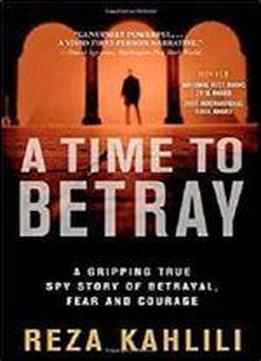 A Time To Betray: A Gripping True Spy Story Of Betrayal, Fear, And Courage
by Reza Kahlili / 2013 / English / EPUB

An exhilarating true story that reads like a spy thriller about a former CIA operative recruited out of Iran, while he served as a member of the secretive and highly feared Revolutionary Guards of Iran. A TIME TO BETRAY This exhilarating, award-winning memoir of a secret double life reveals the heart-wrenching story of a man who spied for the American government in the ranks of the notorious Revolutionary Guards of Iran, risking everything by betraying his homeland in order to save it. Reza Kahlili grew up in Tehran surrounded by his close-knit family and friends. But the enlightened Iran of his youth vanished forever, as Reza discovered upon returning home from studying computer science in the United States, when the revolution of 1979 ushered in Ayatollah Khomeinis dark age of religious fundamentalism. Clinging to the hope of a Persian Renaissance, Reza joined the Ayatollahs elite Revolutionary Guards. As Khomeinis tyrannies unfolded, as fellow countrymen turned on each other, and after the deeply personal horrors he witnessed firsthand inside Evin Prison, a shattered and disillusioned Reza returned to America to dangerously become Wally, a spy for the CIA. In A Time to Betray, Reza not only relates his razors-edge, undercover existence from moment to heart-pounding moment as he supplies vital information from the Iran-Iraq War, the bombing of Pan Am Flight 103, the Iran-Contra affair, and more he also documents a chain of incredible events that culminates in a nations fight for freedom that continues to this very day, making this a timely and vital perspective on the future of Iran and the fate of the world.