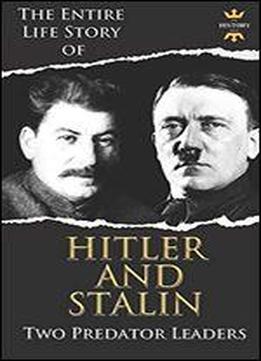 Read Biographies of two predator leadersDownload for FREE on Kindle Unlimited + Free Bonus Inside!Read on your Computer, Mac, Smartphone, Kindle Reader, iPad, or Tablet.Adolf Hitler was a German politician, demagogue, and Pan-German revolutionary, who was the leader of the Nazi Party, Chancellor of Germany and Fhrer ("Leader") of Nazi Germany. As dictator, Hitler initiated World War II in Europe with the invasion of Poland and was central to the Holocaust.Inside you'll read about Adolf's Paternal and Maternal roots A troubled childhood Joined the forces of World War I Chancellor Hitler Night of the long knives Fuhrer Hitler World War II and full effect The end is nigh And much more!Hitler gained popular support by attacking the Treaty of Versailles and promoting Pan-Germanism, anti-Semitism, and anti-communism with charismatic oratory and Nazi propaganda. He frequently denounced international capitalism and communism as being part of a Jewish conspiracy.Initially presiding over an oligarchic one-party regime that governed by plurality, Ioseb Besarionis dze Jughashvili became the de facto dictator of the Soviet Union. Joseph Stalin raised funds for Vladimir Lenin's Bolshevik faction via robberies, kidnappings, and protection rackets. Repeatedly arrested, he underwent several internal exiles.Inside you'll read about From Georgia with rage Winds of change begin to blow Warfare Purges The great terror The Great Patriotic War Victory and aftermath Cold War All things must end And much more!To eradicate those regarded as "enemies of the working class," Stalin instituted the "Great Purge" in which over a million were imprisoned and at least 700,000 were executed from 1934 to 1939. In 1939 Stalin's government signed a non-aggression pact with Nazi Germany. Germany ended the pact by invading the Soviet Union in 1941. The Soviet Red Army halted the German incursion and captured Berlin in 1945, ending World War II in Europe.