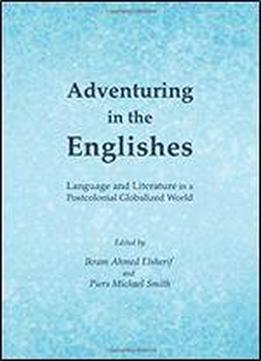 Adventuring In The Englishes: Language And Literature In A Postcolonial Globalized World
by Ikram Ahmed Elsherif / 2013 / English / PDF

This book is a compilation of articles dealing with linguistic and literary concerns relating to the global production and consumption of literature in English, and global instruction and education in the English language. The umbrella theme of the book is "English Language and Literature in a Globalized World" or "The Global Appropriation and hybridization of English". The contributing authors are international scholars and creative writers from different parts of the world who offer unique perspectives on the ways in which the English language and English literature are constantly developing and changing in a postcolonial global world. They are mostly professors of English who have cross-cultural teaching experiences and who live or have lived and worked in both Anglophone and non-Anglophone countries. To many of them English is their dominant language, but not the mother tongue. All of them are bilingual or even trilingual. Thus their scholarly investigations are flavoured with their personal experiences or "adventures" with the language and its users. Their unique visions reveal a process of adoption, adaptation, reinvention and appropriation of both the language and its literature in a multi-national, multi-cultural, and multi-lingual community of a world where English has become the most recognizable sign of globalization. This book will appeal to all scholars and practitioners of English language and literature, particularly those interested in colonial and postcolonial studies, modern and post-modern studies, ethnic and minority studies, feminist studies, cross-cultural studies, linguistics, semantics, ESP and curriculum development.