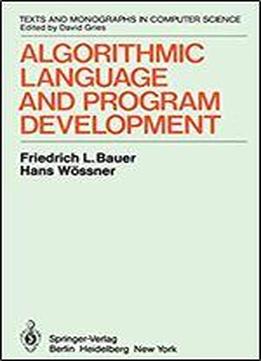 The title of this book contains the words ALGORITHMIC LANGUAGE, in the singular. This is meant to convey the idea that it deals not so much with the diversity of program­ ming languages, but rather with their commonalities. The task of formal program develop­ It allows classifying ment proved to be the ideal frame for demonstrating this unity. concepts and distinguishing fundamental notions from notational features and it leads immediately to a systematic disposition. This approach is supported by didactic, practical, and theoretical considerations. The clarity of the structure of a programming language de­ signed according to the principles of program transformation is remarkable. Of course there are various notations for such a language. The notation used in this book is mainly oriented towards ALGOL 68, but is also strongly influenced by PASCAL - it could equally well have been the other way round. In the appendices there are occa­ sional references to the styles used in ALGOL, PASCAL, LISP, and elsewhere.