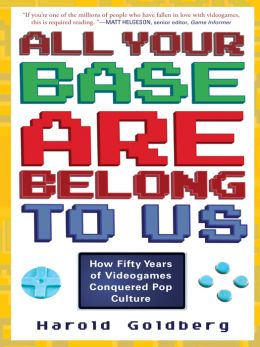 All Your Base Are Belong To Us: How Fifty Years Of Videogames Conquered Pop Culture
by Harold Goldberg / 2011 / English / EPUB

Through the stories of gaming's greatest innovations and most beloved creations, journalist Harold Goldberg captures the creativity, controversy–and passion–behind the videogame's meteoric rise to the top of the pop-culture pantheon. Over the last fifty years, video games have grown from curiosities to fads to trends to one of the world's most popular forms of mass entertainment. But as the gaming industry grows in numerous directions and everyone talks about the advance of the moment, few explore and seek to understand the forces behind this profound evolution. How did we get from Space Invaders to Grand Theft Auto? How exactly did gaming become a $50 billion industry and a dominant pop culture form? What are the stories, the people, the innovations, and the fascinations behind this incredible growth? Through extensive interviews with gaming's greatest innovators, both its icons and those unfairly forgotten by history, All Your Base Are Belong To Us sets out to answer these questions, exposing the creativity, odd theories–and passion–behind the twenty-first century's fastest-growing medium. Go inside the creation of: Grand Theft Auto * World of Warcraft * Bioshock * Kings Quest * Bejeweled * Madden Football * Super Mario Brothers * Myst * Pong * Donkey Kong * Crash Bandicoot * The 7th Guest * Tetris * Shadow Complex * Everquest * The Sims * And many more!