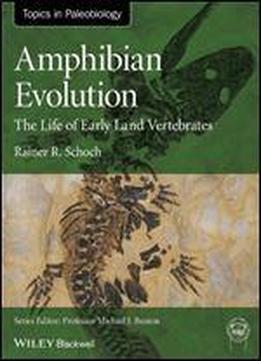 This book focuses on the first vertebrates to conquer land and their long journey to become fully independent from the water. It traces the origin of tetrapod features and tries to explain how and why they transformed into organs that permit life on land. Although the major frame of the topic lies in the past 370 million years and necessarily deals with many fossils, it is far from restricted to paleontology. The aim is to achieve a comprehensive picture of amphibian evolution. It focuses on major questions in current paleobiology: how diverse were the early tetrapods? In which environments did they live, and how did they come to be preserved? What do we know about the soft body of extinct amphibians, and what does that tell us about the evolution of crucial organs during the transition to land? How did early amphibians develop and grow, and which were the major factors of their evolution? The Topics in Paleobiology Series is published in collaboration with the Palaeontological Association, and is edited by Professor Mike Benton, University of Bristol. Books in the series provide a summary of the current state of knowledge, a trusted route into the primary literature, and will act as pointers for future directions for research. As well as volumes on individual groups, the series will also deal with topics that have a cross-cutting relevance, such as the evolution of significant ecosystems, particular key times and events in the history of life, climate change, and the application of a new techniques such as molecular palaeontology. The books are written by leading international experts and will be pitched at a level suitable for advanced undergraduates, postgraduates, and researchers in both the paleontological and biological sciences.