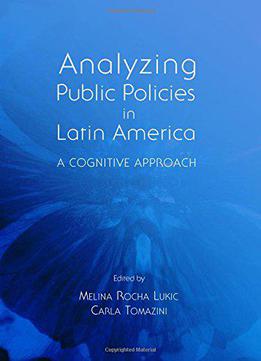 This book gathers together papers that present research on public policies in Latin America, all of which adopt a cognitive approach. This theoretical framework is based on the analysis of public policy from a cognitive and normative perspective; more specifically, through the concepts of paradigm, frame of reference and advocacy coalition. In this sense, the main questions posed here are: what paradigms have Latin American public policies followed lately? How have the paradigms responded to the economic and political changes which have occurred in the region? How have they changed over time? The book also provides a discussion of the actors and coalitions involved in Latin American public policies. While the state used to be the main protagonist of public action, a number of other actors, coalitions and institutions have emerged in recent years, replacing it in several areas. Who are they and who do they represent? How do they influence the setting of agendas in Latin American public policy? What are their strategies and their roles in the formulation and implementation of public policies? In order to answer all these questions, the papers presented in this book combine conceptual discussion and empirical analysis of several fields of public policy such as society, education, land, and indigenous and fiscal policy.