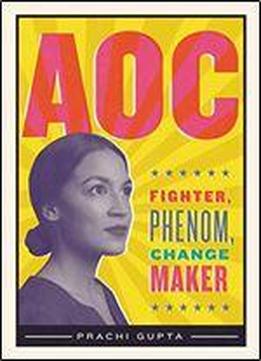 Meet Alexandria Ocasio-Cortez: a fighter, a phenom, a changemaker. In 2018, AOC became the youngest woman ever to be elected to Congressand from that moment on, shes continued to inspire millions of women, millennial voters, and progressives. Her commitment to speaking truth to power, her ability to shape national conversations through the use of social media, and her popularization of democratic socialism have made her a polarizing and fascinating political figure worthy of consideration. Drawing from her public interviews as well as author interviews with historians, former campaign volunteers, and campaign staff, AOC explores how a 28-year-old Latina democratic socialist and bartender from the Bronx ousted a ten-term Congressman against all odds. Featuring an array of her most inspirational quotes and brief explainers on some of her largest proposals, the biography seeks to demystify Ocasio-Cortezs political rise and contextualize her win within this unique moment in US history, illustrating why her win was not a fluke, but rather a sign of the growing influence of the grassroots movements that she represents. Written by former Cosmopolitan.com and Jezebel politics reporter Prachi Gupta, AOC will inspire readers with Ocasio-Cortezs remarkable life story and a clear and compelling look at who she is, what she stands for, and the movement that shes energized.