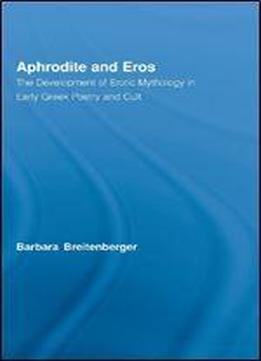 This book offers a groundbreaking revision of the popular image of Aphrodite and Eros that lives on in Roman poetry (Venus and Cupid) and has inspired artists for centuries. An interdisciplinary analysis of the Archaic period using literary, iconographical, and cultic evidence shows the distinct concept behind the two deities of love. Aphrodite's character, sphere of influence, and function feature in her traditional myths and are well reflected in cult. Eros, however, was not yet a similarly personified mythical figure at that stage, nor did he have an individual cult. Breitenberger follows the different stages of the development of Eros's personality. Originally a cosmic entity and an unpersonified aspect of Aphrodite, he was given his mythical identity by successive archaic lyric poets who were particularly keen to mythologize a male counterpart to the established love-goddess Aphrodite. This male love-god turns out to be the divinized homoerotic ideal of the male aristocracy "worshipped" at their symposia. The development of the male love-god is taken as an example to demonstrate that poets' artistic innovation as well as their social and historical background played an important role in creating Greek mythology.