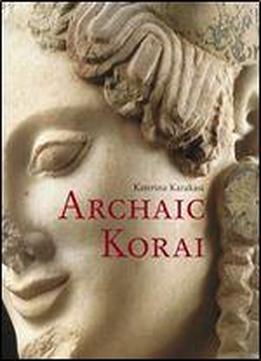 What were the function and significance of the ancient Greek marble statues of maidens known as korai? Whom were they supposed to represent? The author addresses these questions on the basis of her exhaustive research. Between the seventh and fifth centuries B.C., these statues, carved with extreme skill, were widely distributed across the Greek world. They could be found in both sanctuaries and cemeteries. They were discovered in astonishing numbers on the Akropolis in Athens, where on a January day in 1886 excavators uncovered no fewer than fourteen of them in the presence of Greece's king, George I. Following that find, scholars began to focus increased attention on these impressive sculptures of young women dressed in elaborate, often brightly painted costumes, richly adorned with jewelry, and holding attributes in their hands. Any number of studies have attempted to place the korai in their proper chronological sequence and analyze their style, so as to be able to ascribe them to particular art production centers if not specific artists. Yet to this day, no one has managed to explain why such statues were created. In her search for answers, the author takes an approach that sets her apart from earlier scholars. She first presents all the known korai in photographs, some of them in color and published here for the first time. She then describes their various features in detail and summarizes her findings in a comprehensive series of tables. On the basis of the resulting catalogue, she attempts to determine just where each kore was originally placed and to discover its historical and cultural context. Finally, she offers answers to the crucial questions. She explains who the korai were and what they meant. She also examines the motives of the people who commissioned such splendid figures and discusses their position in Greek society.