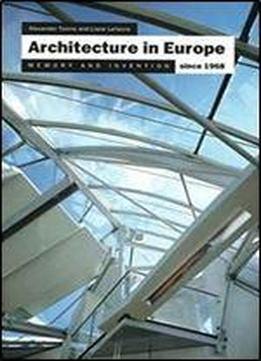 Architecture In Europe Since 1968: Memory And Invention
by Alexander Tzonis / 1997 / English / PDF

Winner of an American Institute of Architects Award, this book surveys twenty years of a period characterized by conflict between tradition and invention, modern and anti-modern, and by an abundance of disparate design solutions. The epoch begins with the completion in 1972 of the first commissions embodying the ideas that sprang out of the events of 1968– a year when student unrest and political upheaval crystallized new intellectual and cultural attitudes. It ends in the early 1990s, a time when both Modernism and earlier traditions began to be reappraised. Over seventy-five projects are presented, with critical essays, photographs, drawings, site diagrams, and construction details. Extensive documentation includes background data on each project, bibliographies, and biographies, with contributions from Jean-Louis Cohen, Lucius Burckhardt, Fritz Neumeyer, and Peter Rice.