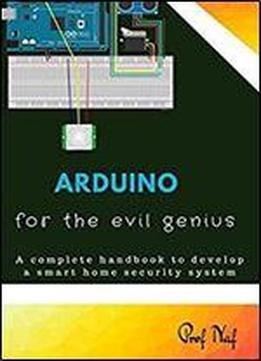 Arduino, onboard micro-controller, has been considered to be a popular gear for building digital devices. With the introduction on Arduino, these digital devices interact with the physical world by sensing and controlling various objects from the environment. This book titled "Arduino for the Evil Genius: a complete handbook to develop a smart home security system" has been prepared and presented also to introduce Arduino for kids and even introduce Arduino for Dummies, also. Thus, this Arduino project handbook provides a step by step guidance along with the relevant codes to develop a smart home gadget, which automates and secures our home. This solution uses Arduino UNO and few other sensors to detect the presence of intruders. Moreover, a ultrasonic sensor is used as a radar which can automatically detect threats. Furthermore, a PIR sensor is used to detect human presence with an integrated alarm system. The book is divided into several chapters where the first chapter discusses on the required hardware and system design. Later, installation of the hardware components and required codes in relevant languages are explained. Now, lets enjoy the ride.