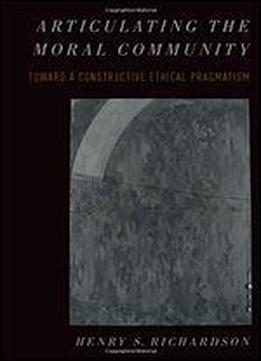 Is morality fixed objectively, independently of all human judgment, or do we "invent" right and wrong? Articulating the Moral Community argues that neither of these simple answers is correct. Its central thesis is that, working within zones of objective indeterminacy, the moral community-the community of all persons-has the authority to introduce new moral norms. Unlike political communities, which are centralized, non-inclusive, and backed by coercion, the moral community is decentralized, inclusive, and not coercively backed. This book explains in detail how its structure arises from efforts by individuals to work out intelligently with one another how to respond to morally important concerns. Developing a novel theory of dyadic rights and duties based on this phenomenon, the book argues that conscientious efforts of this kind provide moral input, authoritative only over the parties involved. After sufficient uptake and reflective acceptance by the moral community, however, these innovations become new moral norms. This account of the moral community's moral authority is motivated by, and supports, a type of normative ethical theory, constructive ethical pragmatism, which-to use an unfashionable distinction defended in the book-rejects the consequentialist claim that rightness is to be defined as a function of goodness and the deontological claim that principles of right stand fixed, independently of the good. It holds, rather, that what we ought to do depends on our continuing efforts to specify the right and the good in light of each other.