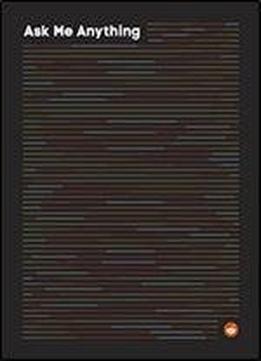 What if you could ask President Barack Obama anything - anything at all? Or maybe your favorite celebrity, say, Madonna, Bill Gates or Buzz Aldrin? What would you want to know? This is the opportunity that Reddit offers on the Ask Me Anything community. In Ask Me Anything Volume 1, the first book of its kind, Reddit brings you a collection featuring the most interesting, provocative, humorous and inspirational sessions. Some will make you think, many will make you laugh and a few will expand your horizons in ways you never expected. Reddit is a social networking website containing content and submissions that are driven to prominence thanks to votes cast by the user base. The site is broken down into more than 10,000 communities, commonly referred to as subreddits, with each focusing on a specific subject matter. This sets the site apart from other social media platforms since users determine the fate of the content posted on the site. Every user has helped to shape and grow the Ask Me Anything feature with their posts, votes and questions. Arguably the biggest achievement of the Ask Me Anything feature has been allowing interested parties the opportunity to have unprecedented access to a wide range of people. From Martha Stewart to restaurant fry cooks, from Sir David Attenborough to a child raised in a rainforest, the mundane becomes fascinating and the outrageous suddenly seems normal.