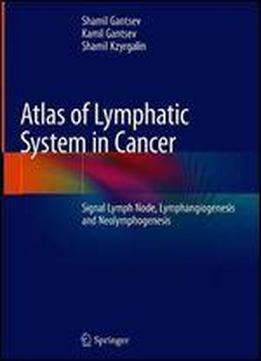 This atlas contains a large number of original photographs illustrating the anatomy, research methods, and structural features of the structure of the lymphatic apparatus in oncological diseases. The tissue complexes of the axillary region have been studied in detail. The lymphatic maps of the axillary region in cancer are presented, including those with manifestations of lymphangiogenesis newly formed lymph nodes formed as a result of neolymphogenesis are also considered. Atlas of Lymphatic System in Cancer: Signal Lymph Node, Lymphangiogenesis and Neolymphogenesis is intended for oncologists, anatomists, morphologists and doctors of other specialties. The book is the result of ten years of research. The applied technology of ultrasonic isolation of anatomical structures made it possible to take a fresh look at the lymphatic apparatus in cancer and describe the phenomenon of neolymphogenesis.