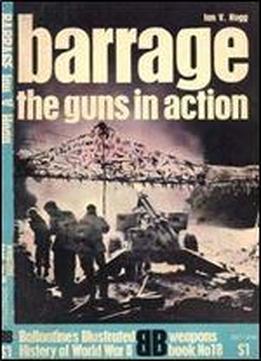 A barrage is a line or barrier of exploding artillery shells, created by the co-ordinated aiming of a large number of guns firing continuously. Its purpose is to deny or hamper enemy passage through the line of the barrage, to attack a linear position such as a line of trenches or (as a creeping or rolling barrage) to neutralize the enemy in the path of an advance by friendly troops. It contrasts with a concentration, in which all the guns aim at the same small area. The barrage was developed in World War I, and by late 1916 the creeping barrage was the standard means of deploying artillery to support an infantry attack, with the infantry following the advancing barrage as closely as possible. Its employment in this way recognised the importance of artillery fire in neutralising, rather than destroying, the enemy. It was found that a creeping barrage immediately followed by the infantry assault could be far more effective than weeks of preliminary bombardment. Barrages remained in use in World War II and later, but only as one of a variety of artillery tactics made possible by improvements in predicted fire, target location and communications.