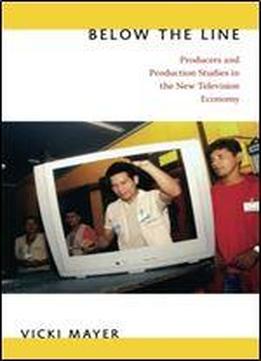 Below The Line: Producers And Production Studies In The New Television Economy
by Vicki Mayer / 2011 / English / PDF

Below the Line illuminates the hidden labor of people who not only produce things that the television industry needs, such as a bit of content or a policy sound bite, but also produce themselves in the service of capital expansion. Vicki Mayer considers the work of television set assemblers, soft-core cameramen, reality-program casters, and public-access and cable commissioners in relation to the globalized economy of the television industry. She shows that these workers are increasingly engaged in professional and creative work, unsettling the industrys mythological account of itself as a business driven by auteurs, manned by an executive class, and created by the talented few. As Mayer demonstrates, the new television economy casts a wide net to exploit those excluded from these hierarchies. Meanwhile, television set assemblers in Brazil devise creative solutions to the problems of material production. Soft-core videographers, who sell televised content, develop their own modes of professionalism. Everyday people become casters, who commodify suitable participants for reality programs, or volunteers, who administer local cable television policies. These sponsors and regulators boost media industries profits when they commodify and discipline their colleagues, their neighbors, and themselves. Mayer proposes that studies of production acknowledge the changing dynamics of labor to include production workers who identify themselves and their labor with the industry, even as their work remains undervalued or invisible.