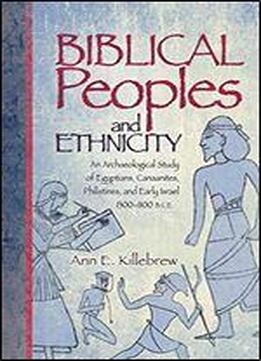 Ancient Israel did not emerge within a vacuum but rather came to exist alongside various peoples, including Canaanites, Egyptians, and Philistines. Indeed, Israels very proximity to these groups has made it difficultuntil nowto distinguish the archaeological traces of early Israel and other contemporary groups. Through an analysis of the results from recent excavations in light of relevant historical and later biblical texts, this book proposes that it is possible to identify these peoples and trace culturally or ethnically defined boundaries in the archaeological record. Features of late second-millennium B.C.E. culture are critically examined in their historical and biblical contexts in order to define the complex social boundaries of the early Iron Age and reconstruct the diverse material world of these four peoples. Of particular value to scholars, archaeologists, and historians, this volume will also be a standard reference and resource for students and other readers interested in the emergence of early Israel.