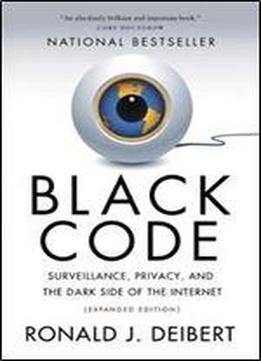 Black Code: Surveillance, Privacy, And The Dark Side Of The Internet
by Ronald J. Deibert / 2013 / English / EPUB

Cyberspace is all around us. We depend on it for everything we do. We have reengineered our business, governance, and social relations around a planetary network unlike any before it. But there are dangers looming, and malign forces are threatening to transform this extraordinary domain. In Black Code, Ronald J. Deibert, a leading expert on digital technology, security, and human rights, lifts the lid on cyberspace and shows what's at stake for Internet users and citizens. As cyberspace develops in unprecedented ways, powerful agents are scrambling for control. Predatory cyber criminal gangs such as Koobface have made social media their stalking ground. The discovery of Stuxnet, a computer worm reportedly developed by Israel and the United States and aimed at Iran's nuclear facilities, showed that state cyberwar is now a very real possibility. Governments and corporations are in collusion and are setting the rules of the road behind closed doors. This is not the way it was supposed to be. The Internet's original promise of a global commons of shared knowledge and communications is now under threat. Drawing on the first-hand experiences of one of the most important protagonists in the battle – the Citizen Lab and its global network of frontline researchers, who have spent more than a decade cracking cyber espionage rings and uncovering attacks on citizens and NGOs worldwide – Black Code takes readers on a fascinating journey into the battle for cyberspace. Thought-provoking, compelling, and sometimes frightening, it is a wakeup call to citizens who have come to take the Internet for granted. Cyberspace is ours, it is what we make of it, Deibert argues, and we need to act now before it slips through our grasp.