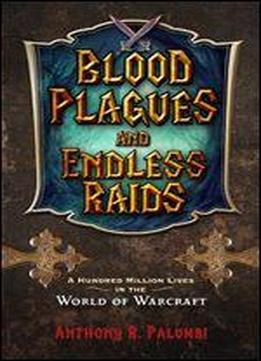 Blood Plagues And Endless Raids: A Hundred Million Lives In The World Of Warcraft
by Anthony R. Palumbi / 2017 / English / PDF

In 2005, the video game World of Warcraft struck the cultural landscape with tidal force. One hundred million have people played WoW in the twelve years since its inception, making it by any objective standard the most popular online video game of all time. Those hundred million people did more than play they worked, they fought, they triumphed, they spread contagious plagues from jungle dungeons, they held entire game servers hostage, they married each other in real life and bore children. They developed new identities, swapping their workaday selves for warriors, mages, assassins, and healers. They built communities and rose to lead them. WoW was the worldfirst mass virtualization before Facebook or Twitter, millions of people established online identities and had to reckon with the consequences in their real lives. Nearly every American under the age of 35 either played it or knows someone who did. The former group adored it the latter wondered why, but never quite knew how to phrase the question. No matter how you feel about video games, you inhabit the world it created. You know these players this great and scattered tribe even if you ve never before heard their stories. Blood Plagues and Endless Raids explores a wild, incredibly complex culture partly through the authorengaging personal story, from absolute neophyte to leader of North Americatop Spanish-speaking guild, but also through the stories of other players and developers. It represents the definitive (and only) account of one of the worldbiggest pop culture phenomena, including how WoW and other MMORPGs helped establish the always-online universe of social media. And it tackles questions of identity, motivation, reward, and leadership in online groups. But in the end this book isn t about video games or slaying dragons. Itabout a huge and passionate community of people: the connections they made, the experiences they shared, and the love they held for one another.