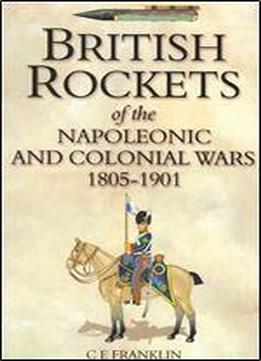 The use of rockets as weapons can be traced back to 13th century China. The emerging British Empire first came into contact with rockets as weapons during the Mahratta Wars in 1799, and their effect was such as to cause the East Indian Company great concern and to seek their own supply. In Europe, Britain was at war with France and the French had gathered an invasion flotilla in the basin of Boulogne harbor against which the Royal Navy had been unable to inflict any serious damage. The use of rockets was proposed to attack the French ships, and thus began the era of the British War Rocket. This book explains the design and development of rockets, from Congreve's primitive side stick rockets to the better balanced center stick rocket, and finally the rotating Hale rocket. The designs of rocket launchers and how they were used are very detailed, and the book describes the carts and equipment used to transport rockets, limbers, ammunition wagons, and more throughout the Napoleonic, Crimean, and Empire periods.