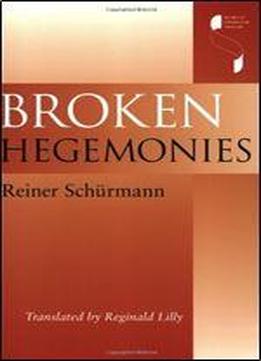 ... a book of striking originality and depth, a brilliant and quite new interpretation of the nature and history of philosophy." ?John Sallis In Broken Hegemonies, the late distinguished philosopher Reiner Schurmann offers a radical rethinking of the history of Western philosophy from the Greeks through Heidegger. Schurmann interprets the history of Western thought and action as a series of eras governed by the rise and fall of certain dominating philosophical ideas that contained the seeds of their own destruction. These eras coincided with their dominant languages: Greek, Latin, and vernacular tongues. Analyzing philosophical texts from Parmenides, Plotinus, and Cicero, through Augustine, Meister Eckhardt, and Kant, to Heidegger, Schurmann traces the arguments by which these ideas gained hegemony and by which their credibility was ultimately demolished. Recognizing the failure of ultimate norms, Broken Hegemonies questions how humanity today is to think and act in the absence of principles.