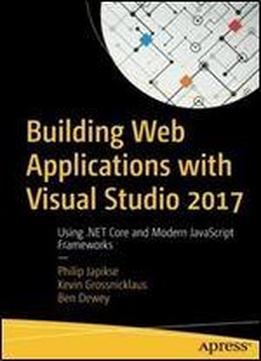 Learn how to build web applications from three Microsoft MVPs. After building the data application layer using Entity Framework Core and a RESTful service using ASP.NET Core, you will then build the client side web application three ways: first, using ASP.NET Core, then using Angular 2, and, finally, using React. You will be able to compare and contrast these UI frameworks and select the best one for your needs. .NET Core is a complete rewrite of the popular .NET and its related frameworks. While many concepts are similar between .NET Core and the .NET 4.6 framework, there are revolutionary changes as well, including updates to Entity Framework Core and ASP.NET Core. The first section of this book covers the three main parts of building applications with C#: Entity Framework, ASP.NET Core Services, and ASP.NET Core Web Applications. There is also an explosion in popularity of JavaScript frameworks for client side development, and the authors cover two of the most popular UI frameworks. Start with TypeScript for developing clean JavaScript, along with a client side build tool such as Gulp, Grunt, and WebPack. Using the same data access layer and RESTful service from the .NET Core application, you can rebuild the UI using Angular 2. Then, repeat the process using React, for a true comparison of building client side applications using ASP.NET Core, Angular 2, and React. What You'll Learn Understand the fundamentals of .NET Core and what that means to the traditional .NET developer Build a data access layer with Entity Framework Core, a RESTful service with ASP.NET Core MVC, and a website with ASP.NET Core MVC and Bootstrap Automate many build tasks with client side build utilities Who This Book Is For Intermediate to advanced .NET developers