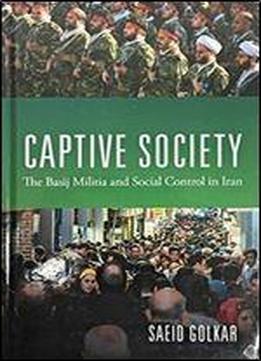 Iran's Organization for the Mobilization of the Oppressed (Sazeman-e Basij-e Mostazafan), commonly known as the Basij, is a paramilitary organization used by the regime to suppress dissidents, vote as a bloc, and indoctrinate Iranian citizens. Captive Society surveys the Basij's history, structure, and sociology, as well as its influence on Iranian society, its economy, and its educational system. Saied Golkar's account draws not only on published materialsincluding Basij and Revolutionary Guard publications, allied websites, and blogsbut also on his own informal communications with Basij members while studying and teaching in Iranian universities as recently as 2014. In addition, he incorporates findings from surveys and interviews he conducted while in Iran.