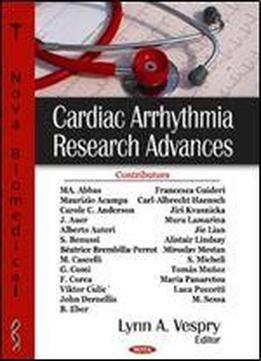 Cardiac arrhythmia is a term that denotes a disturbance of the heart rhythm. Cardiac arrhythmias can range in severity from entirely benign to immediately life-threatening. A cardiac arrhythmia, also called cardiac dysrhythmia, is a disturbance in the regular rhythm of the heartbeat. Several forms of cardiac arrhythmia are life-threatening and a medical emergency. Cardiac arrhythmias sometimes are classified according to their origin as either ventricular arrhythmias (originating in the ventricles) or supraventricular arrhythmias (originating in heart areas above the ventricles, typically the atria). They also can be classified according to their effect on the heart rate, with bradycardia indicating a heart rate of less than 60 beats per minute and tachycardia indicating a heart rate of more than 100 beats per minute. This book presents new and important research in the field including an Expert Commentary on collateral damage.