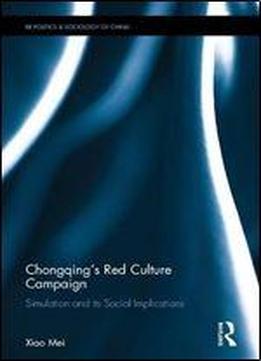 Chongqings Red Culture Campaign: Simulation And Its Social Implications (routledge Research On The Politics And Sociology Of China)
by Xiao Mei / 2017 / English / PDF

Between 2009 and 2012, the city of Chongqing came into the national, and even international spotlight, as it became the geographical centre of the Singing Red, Smashing Black campaign, and later the political storm that swept China. Chongqings Red Culture Campaign drew an incredible amount of interest at the time, but speculation and prejudice has since blurred the public understanding of the sensational story that ties the campaign with the rise and fall of a political star, Bo Xilai. This book, therefore, seeks to study the nature of Chongqings Red Culture Campaign, and the interaction between the political programme and the practices of its participants. Based on fieldwork conducted in Chongqing, it seeks to question whether the Red Culture Campaign was actually a return to Maoist revolutionary mass campaigning whilst examining the relationship between the CCP's political power and the lives of the ordinary people as reflected in the case of the campaign. Ultimately, it highlights that the campaign was not in fact a real Maoist mass movement. Although it followed the pre-existing model of past mass campaigns in China, containing a series of frequent and highly performative operations, Xiao Mei argues that it essentially demonstrated critical features of simulation. By contributing to our understanding of the discrepancies between a designed political programme, and what it actually becomes when implemented on the ground, this book will be of use to students and scholars of Chinese Studies, Politics and Sociology.