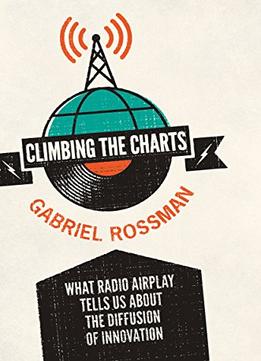 Climbing The Charts: What Radio Airplay Tells Us About The Diffusion Of Innovation
by Gabriel Rossman / 2012 / English / PDF

Despite the growth of digital media, traditional FM radio airplay still remains the essential way for musicians to achieve commercial success. Climbing the Charts examines how songs rise, or fail to rise, up the radio airplay charts. Looking at the relationships between record labels, tastemakers, and the public, Gabriel Rossman develops a clear picture of the roles of key players and the gatekeeping mechanisms in the commercial music industry. Along the way, he explores its massive inequalities, debunks many popular misconceptions about radio stations' abilities to dictate hits, and shows how a song diffuses throughout the nation to become a massive success. Contrary to the common belief that Clear Channel sees every sparrow that falls, Rossman demonstrates that corporate radio chains neither micromanage the routine decision of when to start playing a new single nor make top-down decisions to blacklist such politically inconvenient artists as the Dixie Chicks. Neither do stations imitate either ordinary peers or the so-called kingmaker radio stations who are wrongly believed to be able to make or break a single. Instead, Rossman shows that hits spread rapidly across radio because they clearly conform to an identifiable style or genre. Radio stations respond to these songs, and major labels put their money behind them through extensive marketing and promotion efforts, including the illegal yet time-honored practice of payoffs known within the industry as payola. Climbing the Charts provides a fresh take on the music industry and a model for understanding the diffusion of innovation.