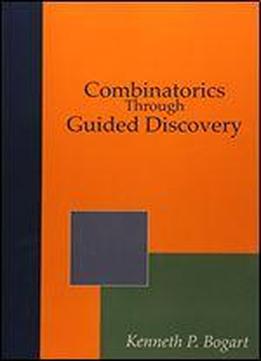 This book is an introduction to combinatorial mathematics, also known as combinatorics. The book focuses especially but not exclusively on the part of combinatorics that mathematicians refer to as "counting." The book consist almost entirely of problems. Some of the problems are designed to lead you to think about a concept, others are designed to help you figure out a concept and state a theorem about it, while still others ask you to prove the theorem. Other problems give you a chance to use a theorem you have proved. From time to time there is a discussion that pulls together some of the things you have learned or introduces a new idea for you to work with. Many of the problems are designed to build up your intuition for how combinatorial mathematics works. Above all, this book is dedicated to the principle that doing mathematics is fun. As long as you know that some of the problems are going to require more than one attempt before you hit on the main idea, you can relax and enjoy your successes, knowing that as you work more and more problems and share more and more ideas, problems that seemed intractable at first become a source of satisfaction later on. This book is released under an open source licence and is available in electronic form for free at http: //bogart.openmathbooks.org/.