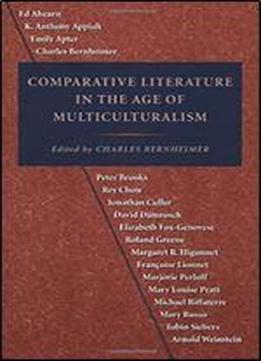 Comparative Literature In The Age Of Multiculturalism (parallax: Re-visions Of Culture And Society)
by Charles Bernheimer / 1994 / English / PDF

In recent years, the idea of multiculturalism has become a powerful—and controversial—influence in a variety of social and cultural territories. In the academic world it has profoundly influenced curriculum and scholarship in the humanities, particularly in traditionally Eurocentric disciplines such as comparative literature. It was hardly surprising, then, that the 1993 report "Comparative Literature at the Turn of the Century"—which endorses a multicultural orientation for the discipline—generated an unprecedented level of interest. The third such report on professional standards issued by the American Comparative Literature Association since 1965, it continues to be the subject of lively discussion and debate. At issue is not only the definition of a discipline but also the cultural function of literary study in general. This book brings together the three ACLA reports (issued in 1965, 1975, and 1993), three responses to the latest report presented at the 1993 MLA convention (by K. Anthony Appiah, Mary Louise Pratt, and Michael Riffaterre), and thirteen additional position papers by prominent scholars in the humanities. Contributors: Ed Ahearn • K. Anthony Appiah • Emily Apter • Charles Bernheimer • Peter Brooks • Rey Chow • Jonathan Culler • David Damrosch • Elizabeth Fox-Genovese • Roland Greene • Margaret R. Higonnet • Francoise Lionnet • Marjorie Perloff • Mary Russo • Tobin Siebers • Mary Louise Pratt • Michael Riffaterre • Arnold Weinstein