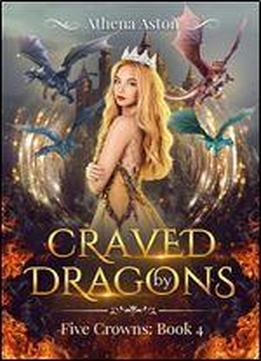 Having retrieved the Fire and Water Crowns, Diana and the four Dragon Princes now head to the Fire Kingdom in desperate search of the remaining crowns. But with Emperor’s agents lurking in every corner, Diana’s life is in mortal danger. That is unless they manage to obtain the Wooden, Golden, and Earth Crowns, which won't be easy. Emperor Svarog is a deadly enemy to have. Hot on their trail and determined to end them all, Diana is relieved to be surrounded by her Princes and the many allies they make along their way. An epic battle lurks ahead as they uncover the Five Kingdom’s deepest, darkest secrets. Emperor Svarog or not, Diana knows there’s nothing she wouldn’t do to save her dragons—even at the cost of her own life. She's determined to bring the Emperor down and free the Five Kingdoms from his tyrannous rule. Winning the battle would mean transitioning from a humble college student to the powerful Queen of the Wood Kingdom, but who will take her side as King? With no male Wooden Dragons left, Diana might end-up ruling alone at the top of a deserted kingdom.