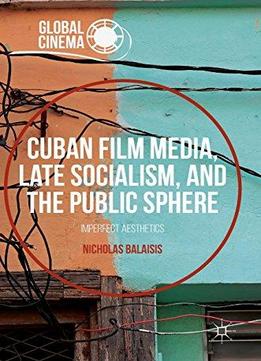 This book maps the aesthetic experience of late socialism through Cuban film and media practice. It shows how economic and material scarcity as well as political uncertainty is expressed aesthetically in films from the period following the collapse of the Soviet Union, a characteristic described as imperfect aesthetics. The films examined in the book draw attention to the unique temporal experience of late socialism, a period marked both by rapid change and frustrating stasis, nostalgia for Cuba’s past and anxiousness about its future. Aesthetic modes such as melodrama and irony, and stylistic elements such as direct address and the long take, communicate the temporal experience of late socialism in Cuba, where new global traffic and a globalizing economy co-exist with iconic socialist features of the Cuban revolution. Film aesthetics constitute an important public dimension within this context, serving as a site of political and cultural critique amidst political uncertainty. In examining large-scale international co-productions as well as regional film collectives and amateur media making, the book traces the aesthetic continuities between contemporary film practices and those of the immediate post-revolutionary period, showing how the Cuban revolution continues to be an important touchstone for contemporary Cuban filmmakers in the face of new and imminent change.