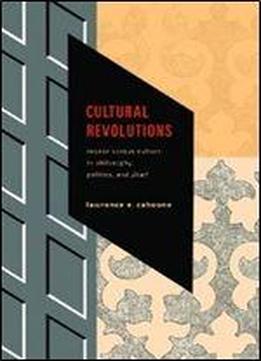 In this probing examination of the meaning and function of culture in contemporary society, Lawrence Cahoone argues that reason itself is cultural, but no less reasonable for it. While recent political and philosophical movements have recognized that cognition, the self, and politics are embedded in culture, most fail to appreciate the deep changes in rationalism and liberal theory this implies, others leap directly into relativism, and nearly all fail to define culture. Cultural Revolutions systematically defines culture, gauges the consequences of the ineradicably cultural nature of cognition and action, yet argues that none of this implies relativism. After showing where other &new culturalists& have gone wrong, Cahoone offers his own definition of culture as teleologically organized practices, artifacts, and narratives and analyzes the notion of cultural membership in relation to race, ethnicity, and &primordialism.& He provides a theory of culture&s role in how we form our sense of reality and argues that the proper conception of culture dissolves &the problem& of cultural relativism. Applying this perspective to Islamic fundamentalism, Cahoone identifies its conflict with the West as representing the break between two of three historically distinctive forms of reason. Rather than being &irrational,& he shows, fundamentalism embodies a rationality only recently devalued&but not entirely abandoned&by the West. The persistence of plural forms of reason suggests that modernization in various world cultures is compatible with continued, even magnified, cultural differences.