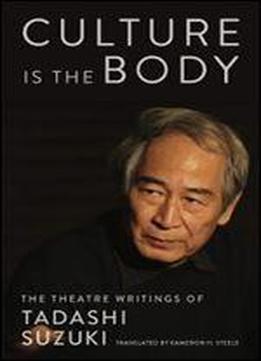 "From his artistic home in the small village of Toga Mura in the Japanese Alps, Tadashi Suzuki's influence has spread around the world, transcending cultural and political boundaries. His bold vision of what the theatre can be and what the theatre can do is both uncompromising and exceedingly generous. The SCOT company's groundbreaking productions and methods of training have inspired and continue to inspire generations of theatre artists and audiences. The day I first met Suzuki, the trajectory of my life was altered irrevocably. The very existence of SITI Company is due to Suzukis foresight, bigheartedness and determination." -Anne Bogart "What takes my breath away most about Tadashi Suzuki's work is the precision and accuracy with which he manages time and space. For one-and-a-half to two hours, the use of sound, precise scene transitions and mammoth energy compressed through his singular directorial vision create a sustained power which blows the audience awaya shocking style requiring an exceptional attention and concentration from the viewer. His unique method of rigorous actor training has made him a grand master of the rarest variety, enabling him to maintain a company that continues to inspire the evolution of contemporary theatre in our ever-changing world." -Yuri Lubimov "In America the theatre for the most part is naturalistic. People want to be comfortable. They want to identify immediately with the situation. They want everything finished, put in a box and wrapped up with a bow. But I believe, ideally, you want to leave the theatre still thinking about it, still questioning it. What I find exciting about Suzukis work is that we come into the theatre and we have a surprise. We have to think about what we have seen and we leave the theatre thinking about it. I believe that in a sense my work is similar to what Suzuki is doing in his work. Theatre that you have to rethink. It poses more questions than answers." -Robert Wilson Renowned for his actor training methods, Tadashi Suzuki provides a thorough and accessible formulation of his ideas and beliefs in this new edition of his theater writings. One of the world's most revered theater directors, Suzuki is also a seminal thinker and practitioner whose work has had a profound influence on theater worldwide. This landmark collection provides a useful, provocative look at his philosophical and practical approaches to the stage. Culture is the Body is a complete revision of Suzuki's influential book The Way of Acting, featuring new essays and in a revised translation by Kameron Steele, a longtime collaborator of Suzuki's. Tadashi Suzuki is the founder and director of the Suzuki Company of Toga (SCOT), the organizer of Japan's first international theater festival (Toga Festival), and the creator of the Suzuki Method of Actor Training. Suzuki has articulated his theories in a number of books. He has taught his system of actor training in schools and theaters throughout the world. Besides productions with his own company, he has directed several international collaborations.