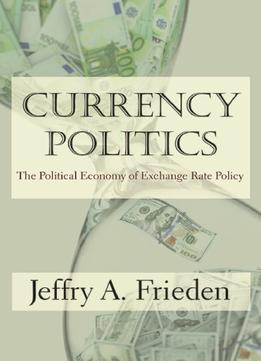 The exchange rate is the most important price in any economy, since it affects all other prices. Exchange rates are set, either directly or indirectly, by government policy. Exchange rates are also central to the global economy, for they profoundly influence all international economic activity. Despite the critical role of exchange rate policy, there are few definitive explanations of why governments choose the currency policies they do. Filled with in-depth cases and examples, Currency Politics presents a comprehensive analysis of the politics surrounding exchange rates. Identifying the motivations for currency policy preferences on the part of industries seeking to influence politicians, Jeffry Frieden shows how each industry's characteristics–including its exposure to currency risk and the price effects of exchange rate movements–determine those preferences. Frieden evaluates the accuracy of his theoretical arguments in a variety of historical and geographical settings: he looks at the politics of the gold standard, particularly in the United States, and he examines the political economy of European monetary integration. He also analyzes the politics of Latin American currency policy over the past forty years, and focuses on the daunting currency crises that have frequently debilitated Latin American nations, including Mexico, Argentina, and Brazil. With an ambitious mix of narrative and statistical investigation, Currency Politics clarifies the political and economic determinants of exchange rate policies.