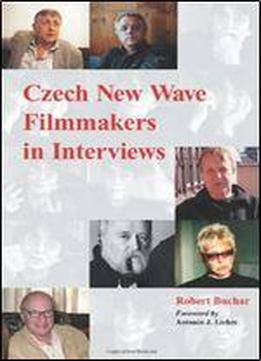 In Czechoslovakia, in the 1960s, artists began to realize that the aesthetics of social realism contrasted with the realities of daily life a movement of film arose in response to the politics and history of the nation. This work collects candid interviews with the creators of the Czech New Wave film movement (1960-2000). Their work put Czech film on the map of world cinema, generating two Oscars for Best Foreign Film, but the official critique marked them as decadent, pessimistic, and reactionary. The work contains sixteen uncensored interviews with filmmakers such as Jan Nemec, Jiri Menzel, Sasa Gedeon, and Jan Sverak, who describe the struggle to realize their visions in a constantly shifting political landscape: from the mid-1960s, through the repressive "normalization" after the Soviet occupation in 1968 (more films were banned in 1970 than during the previous twenty years of Communism), and after the Velvet Revolution of 1989. The interviews give portraits of some of the most talented figures in film, revealing artists searching for individual and national identity, who describe living and making film in the Czech Republic now and in the past, explore how foreign films influence Czech film, and speculate on the future of film. Each interview includes a short biography, filmography, and list of awards. The work is bookended by essays giving background on the political and economic situations leading up to and after the Velvet Revolution.