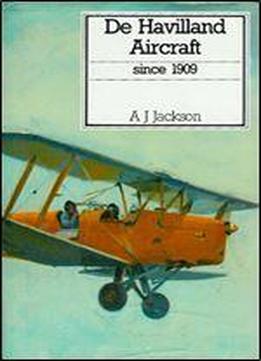 The de Havilland Aircraft Company was founded in 1920, but had its origins with the first steps in biplane design made by Geoffrey de Havilland, who in 1908 left his job with the Motor Omnibus Construction Company to embark on a career as an aeroplane designer. During the First World War, his D.H. 4 bomber design was supplied in hundreds to both the Royal Flying Corps and the United States Army Air Service. A D.H.4 variant was also the first aeroplane to provide a passenger service, between Paris and London. The tradition built on the reputation of de Havilland's work during the First World War, also provided the foundation for some of the most popular aircraft for civil and military aviation the D.H.60 G Gipsy Moth, the D.H.71 Tiger Moth, the D.H.98 Mosquito light bomber, and the D.H.106 Comet are all storied names in the history of British aviation. The story that unfolds in these pages also includes the tragic death of Geoffrey de Havilland's son, Geoffrey Jr., a test pilot killed flying the De Havilland D.H.108. Missing: cover.