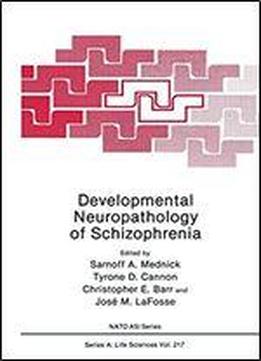 This volume reports the proceedings of a NATO Advanced Workshop held in Castelvecchio Pas coli, Italy, from August 28 - September 1, 1989. An important inspiration for this Workshop came from our studies in Helsinki and Denmark, which have found that exposure to an influenza epidemic during the second trimester of fetal development increases the risk of adult schizophrenia. This finding has stimulated an important new hypothesis in the study of the etiology of schizophrenia. It has suggested the possiblity that disturbances of brain development during gestation may contribute to the risk of adult schizophrenia. We determined that it would be of value to bring together schizophrenia researchers and those doing basic studies of the development of the brain. Both groups of researchers were encouraged to communicate at a level that would help other scientists to integrate their knowledge and techniques into their own discipline. For this reason, perhaps, the papers of this volume are remarkably clear and not difficult to understand. The first four chapters describe the neurochemical and structural aspects of brain development. The chapter by Dziegielewska and Saunders discusses transport mechanisms and the properties of endogenous and exogenous substances that control the internal environment of the developing brain. In the second chapter, Nowakowski reports on his studies of the develop­ ment of the hippocampus in mice genetically inbred to exhibit disruptions of neural migration.