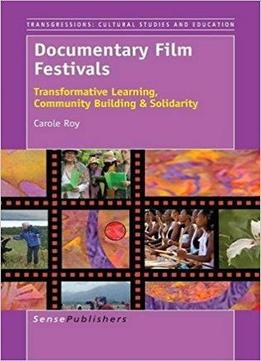 Documentary film festivals do more than provide a venue for watching films: they have the potential to foster critical thinking, especially toward mainstream media. The film festivals discussed in this book also help build a sense of community locally, as well as promote solidarity with people involved in struggles for social justice and ecological integrity around the world. Documentaries by independent filmmakers reveal stories ignored by mass media, stories at times tragic but more often than not inspiring. It can be said that documentary film festivals create a public space for citizens to listen together and to become informed on current issues in greater depth than newscast bulletins offer. This book shows how documentary films create a liminal space with transformative potential, a space that challenges assumptions, supports the development of empathy, and often stimulates engagement and action. In viewing documentaries together and engaging in critical reflection and dialogue, citizens can imagine alternative possibilities and consider solutions. Documentary Film Festivals: Transformative Learning, Community Building & Solidarity offers the voices of attendees, sponsors, and organizers who shared their thoughts and experiences of documentary film festivals and the impact on their views and engagement. Activists and organizers of various social movements who are seeking ways to inform and inspire will see evidence in this text that documentary film festivals are a means of drawing diverse audiences, engaging differences and respectfully promoting hope and preferred visions of the future. Documentary Film Festivals: Transformative Learning, Community Building & Solidarity includes concrete examples of creative and courageous struggles that have led to victories often ignored by the media. This book is bound to inspire.