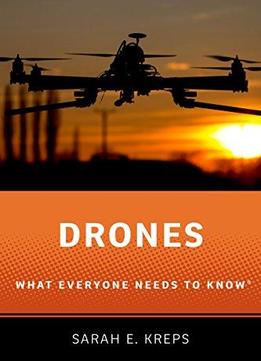 Drones quite possibly represent the most transformative military innovation since jet engines and atomic weaponry. No longer do humans have to engage in close military action or be in the same geographical vicinity as the target. Now, through satellite imaging and remote technology, countries such as the United States can destroy small targets halfway around the world with pinpoint accuracy.

In the last several years, many of the military advancements have been rivaled by those in the commercial realm. Civilian industries have clamored to acquire drones for everything from monitoring crops to filming Hollywood movies to delivering packages. Not surprisingly, the use of drones has generated a lively debate, but no book thus far has engaged the range of themes surrounding drones. How do drones work? To what extent has the technology proliferated to other nations outside the Us? How can they be used on the ground and in maritime environments? How are they being integrated into both military and civilian life?

In Drones: What Everyone Needs to Know, the international relations scholar (and former air force officer) Sarah E. Kreps provides a concise synthesis of the topic. The book explains how they and the systems associated with them work, how they are being used today, and what will become of the technology in the future. What readers need now is a more practical guide to how this technology is reshaping both military and civilian life; this book is that guide. The drone revolution has already changed warfare, and will soon become a commonplace tool in a civilian context too. It is clear that drone technology is here to stay. Drones: What Everyone Needs to Know explains how the revolution happened, what its current contours are, and where we might be headed next.