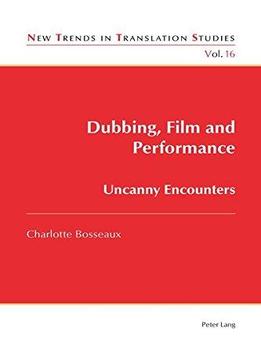 Research on dubbing in audiovisual productions has been prolific in the past few decades, which has helped to expand our understanding of the history and impact of dubbing worldwide. Much of this work, however, has been concerned with the linguistic aspects of audiovisual productions, whereas studies emphasizing the importance of visual and acoustic dimensions are few and far between. Against this background, Dubbing, Film and Performance attempts to fill a gap in Audiovisual Translation (AVT) research by investigating dubbing from the point of view of film and sound studies. The author argues that dubbing ought to be viewed and analysed holistically in terms of its visual, acoustic and linguistic composition. The ultimate goal is to raise further awareness of the changes dubbing brings about by showing its impact on characterization. To this end, a tripartite model has been devised to investigate how visual, aural and linguistic elements combine to construct characters and their performance in the original productions and how these are deconstructed and reconstructed in translation through dubbing. To test the model, the author analyses extracts of the US television series Buffy the Vampire Slayer and its French dubbed version.