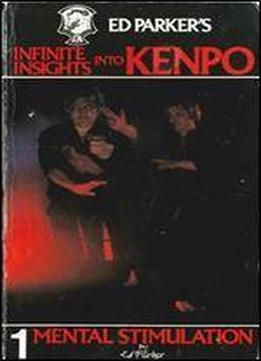 With the accumulation of over thirty years of practical Martial Arts experience the Sr. Grandmaster of American Kenpo Karate Ed Parker Sr. decided to document and share his findings in a monumental series of books. Writing with the intent to expound upon the merits of his American KENPO Martial Arts system, he wrote of it's many facets as, "a discipline, a way of life, a philosophy, and an art and a science." With each book intended to offer a unique and exciting adventure into KENPO knowledge, he called the series of five volumes " Infinite Insights Into Kenpo." Early in 1982, Mr. Parker completed and published the first book in the "Infinite Insights Into Kenpo" series, titled "Mental Stimulation". He wrote, "I was sensitive to the need of innovations during my early years of training. Analyzing the methods of fighting in Hawaii, the place of my birth and early rearing, verified the unquestionable need for an updated approach to the Martial Arts." Mr. Parker broke the bonds of tradition and experimented with more logical and practical means of combating modern day methods of fighting. What emerged was, in his own words, "my own interpretation of the Art." It was this perspective that he introduced in this initial volume and developed and expanded upon through his subsequent works. Mr. Parker introduced an unparalleled number of combative predicaments, indicating the need for several viewpoints. Thee mystic "Universal Pattern", introduced to the public for the first time some twenty years earlier, was put into context. In an effort to develop and articulate definable qualities in the Martial Arts, he sought to set the backdrop for the unknown to become known, the intangible to become tangible and for the mysticism to disappear.