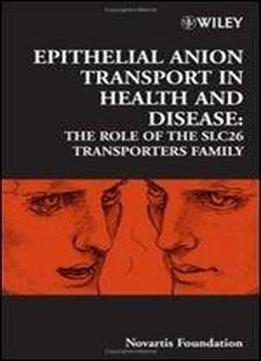 Epithelial Anion Transport In Health And Disease: The Role Of The Slc26 Transporters Family
by Novartis Foundation / 2006 / English / PDF

Cl- absorption and HCO3- secretion are intimately associated processes vital to epithelial function, itself a key physiological activity. Until recently the transporters responsible remained obscure, but a breakthrough occurred with the discovery of the SLC26 transporters family. It is now clear that the SLC26 transporters have broad physiological functions since mutations in several members are linked to a variety of diseases. This book describes the properties of this family in detail, with contributions from the leading global researchers in the field. Complementary views from experts on other ion channels are offered in the discussions, which make fascinating reading. This family consists of at least 10 genes, each of which has several splice variants. Most members of the family are expressed in the luminal membrane of epithelial cells. Characterization of anion transport by three members has revealed that all function as Cl-/HCO3- exchangers, suggesting that SLC26 transporters are responsible for the luminal Cl-/HCO3- exchange activity. The SLC26 transporters are activated by the CF transmembrane conductance regulator and activate it in turn, leading to a model in which these molecules act together to mediate epithelial Cl- absorption and HCO3- secretion.