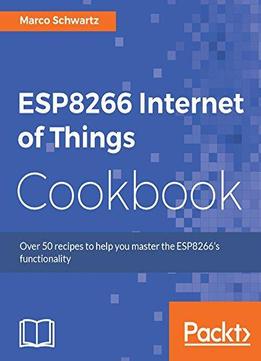 The ESP8266 Wi-Fi Module is a self contained System on Chip (SOC) with an integrated TCP/IP protocol stack and can give any microcontroller access to your Wi-fi network. It is capable of either hosting an application or offloading all Wi-fi networking functions from another application processor.

This book contains practical recipes that will help you master all ESP8266 functionalities. You will start by configuring and customizing the chip in line with your requirements. Then you will focus on core topics such as on-board processing, sensors, GPIOs, programming, networking, integration with external components, and so on. We will also teach you how to leverage Arduino using the ESP8266 and you'll learn about its libraries, file system, OTA updates, and so on. The book also provide recipes on web servers, testing, connecting with the cloud, and troubleshooting techniques. Programming aspects include MicroPython and how to leverage it to get started with the ESP8266. Towards the end, we will use these concepts and create an interesting project (IOT).

By the end of the book, readers will be proficient enough to use the ESP8266 board efficiently.

What you will learn

Control devices from anywhere in the world using MicroPython

Build a cloud-connected power-switch with the ESP8266

Create an ESP8266 robot controlled from the cloud

He has more than five years' experience working in the domain of electrical engineering. Marco's interests center around electronics, home automation, the Arduino and Raspberry Pi platforms, open source hardware projects, and 3D printing. He has several websites about the Arduino, including the Open Home Automation website, which is dedicated to building home automation systems using open source hardware.

Using MicroPython on the ESP8266