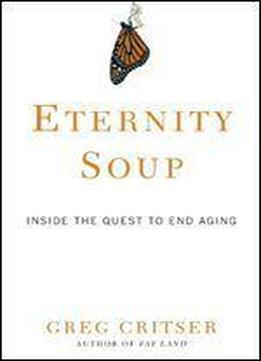 Eternity Soup: Inside The Quest To End Aging
by Greg Critser / 2010 / English / PDF

Product Description: Mix the latest and most rigorous scientific research, irrepressible old-fashioned entrepreneurship, and the ancient human desire to live forever (or at least a lot longer) and the result is today’s exploding multibillion-dollar antiaging industry. Its achievements are so far mostly marginal, but its promises flow with all the allure of a twenty-first-century fountain of youth. In Eternity Soup, acclaimed science writer Greg Critser takes us to every outpost of the antiaging landscape, home to zealots and skeptics, charlatans, and ingenious clinicians and academics. We visit a conference of the Caloric Restriction Society, whose members—inspired by certain laboratory findings involving mice—live their lives in a state just above starvation. (“It’s only the first five years that are uncomfortable,” says one.) We meet the new wave of pharmacists who are reviving the erstwhile art of “compounding”—using mortar and pestle to mix extravagantly profitable potions for aging boomers seeking to recapture flagging sexual vitality. Here, too, are the theorists and researchers who are seeking to understand the cellular-level causes of senescence and aging and others who say, Why bother with that? Instead, we should just learn how to repair and replace organs and tissue that break down, like a vintage automobile collector who keeps a century-old Model T shining and running like new. Eternity Soup is a simmering brew of tes­tosterone patches, human growth hormone (so promising and so potentially dangerous), theories that view aging as a curable disease, laboratory-grown replacement organs (“I want to build a kidney,” says one proponent. “It is such a stup-eed organ!”), and bountiful other troubling, hilarious, and invigorating ingredients. Critser finds plenty of chicanery and credulousness in the antiaging realm but also a surprising degree of optimism, even among some formerly sober skeptics, that we may indeed be on the cusp of something big. And that elicits its own new set of concerns: How will our society cope with a projected new cohort of a million healthy centenarian Americans? How will they liberate themselves from the age segregation that shunts them off to “God’s Waiting Rooms” in the sunbelt? Where will they find joy and meaning to match the inevitable loss that comes with longevity? Eternity Soup is an illuminating, wry, and provocative consideration of a long-dreamed-about world that may now be becoming a reality.